skip to main | skip to sidebar

Does it Matter Who's on First? (Clarifying previous posting order)

About posts, comments, link and photos.

Posts. If you follow my blog, you will know that I posted quite a bit of information recently. For some reason, the postings don't appear in the nice "1st, 2nd, 3rd..." order that I thought they would and rather than continue to mess with publishing again (the blogger help suggestion that I imagine annoys those of you who get emails when I publish) etc., I am sending this out to encourage you to view the latest positings in order. I particularly think the first three are better read in order. You can select from the menu on the left side of the page.
Comments. I love to get them. If you are among those who send comments - thanks! It is great to hear from you and I apologize if I don't get back to you immediately. Sometimes I don't know that you have sent something for a while.
Link and Photos. You are welcome to share my link (http://www.elk13.blogspot.com/) with anyone else. I have been asked that question. And that goes for the photos as well. If you use a photo for something else I just ask that you credit it back to me. My initials are fine. I post as 'elk' on photos but you are welcome to use my name, Biss Kuttner.
Posted by Biss Kuttner at 5:52 PM No comments:

Tough Times (4th of 5 Five for Oct. posted in Nov)

Tough Times. For Zane. Who is persistent in telling me that he wants to know how I FEEL.

are the road, nothing more;

traveler, there is no road,

you make the road by walking. 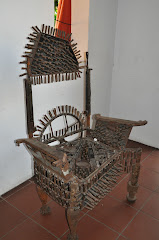 Biss Kuttner
Phoenix, Arizona, United States
I am in Maputo City and very busy learning Portuguese, working with a National Volunteer initiative and keeping in touch with family and friends.